EVN Talks: Zooming in on Recent Political Developments in Armenia 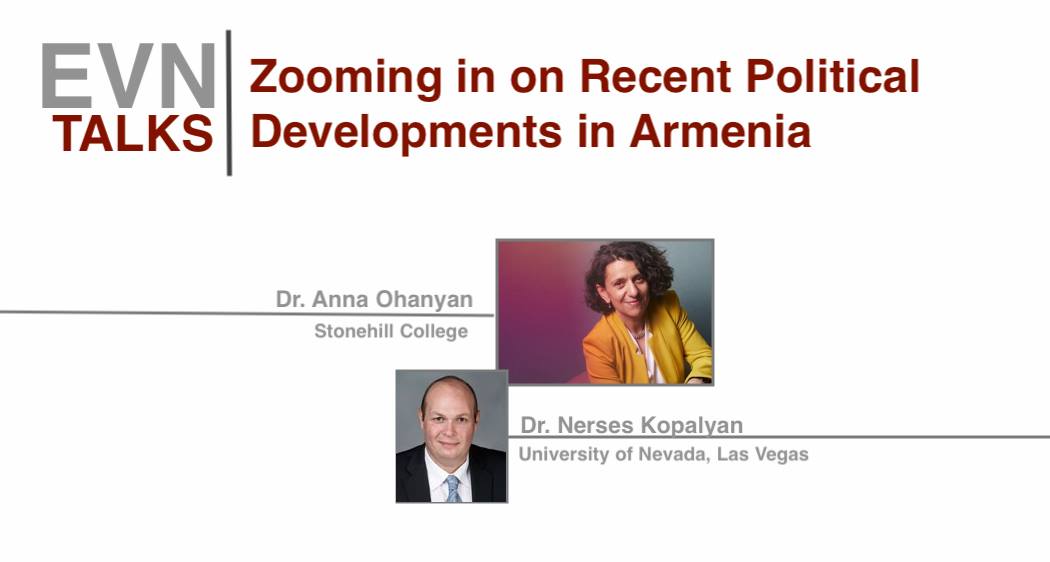 The political landscape in Armenia has undergone major shifts over the past several months, from COVID-19 conspiracies to high-profile charges and arrests to the crisis surrounding the Constitutional Court. Dr. Anna Ohanyan of Stonehill College and Dr. Nerses Kopalyan of the University of Nevada, Las Vegas will present their perspectives and insights on the key topics and narratives dominating Armenia’s political sphere.

Dr. Nerses Kopalyan is an assistant professor-in-residence of Political Science at the University of Nevada, Las Vegas. His fields of specialization include international relations, geopolitics, political theory, and philosophy of science. He has conducted extensive research on polarity, superpower relations, security studies. He is the author of "World Political Systems After Polarity" (Routledge, 2017) and the co-author of "Sex, Power, And Politics" (Palgrave Macmillan, 2016). His current research concentrates on geopolitical and great power relations with an emphasis on Eurasia. He has also done extensive work on political developments in Armenia prior and subsequent to the Velvet Revolution.

Dr. Anna Ohanyan is the Richard B. Finnegan Distinguished Professor of Political Science and International Relations at Stonehill College, and two-time Fulbright Scholar to South Caucasus. Her latest two books are "Russia Abroad: Driving Regional Fracture in Post-Communist Eurasia and Beyond," an edited volume published by Georgetown University Press in 2018, and "Networked Regionalism as Conflict Management" published by Stanford University Press in 2015. Her articles appeared in International Studies Review, Peace and Change, Conflict Resolution Quarterly, Global Governance and Global Society, among other journals. She has also contributed to the Washington Post, Foreign Policy magazine, Al Jazeera, and Wilson Quarterly. Her co-edited book on Armenia’s Velvet Revolution by Bloomsbury Press is forthcoming this September.